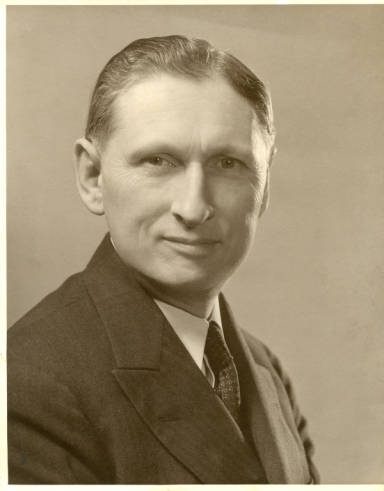 George Pepperdine was born on June 20, 1886, in Mound Valley, Kansas, to John and Mary Pepperdine, the second of three children. His siblings were Fred and Benjamin. In 1903, John sold the family farm and moved the family to Parsons, Kansas. In 1905, George graduated from Parsons Business School and took his first job with a local gas company. Over the next few years, he held a variety of office and bookkeeping jobs in Missouri, Kansas, and Oklahoma. In 1907, the family moved and returned to farming, but George stayed in Kansas City, Missouri, and took a job as a bookkeeper at an automobile garage.

George married a woman from his hometown, Lena Rose Baker, on October 17, 1907. Lena was born on March 20, 1888, in Kansas to William and Agnes Baker. She was the oldest of seven children, with five brothers (Ralph, Ernest, Hallie, Herbert, and Wayne) and one sister (Winnifred). Her father was a carpenter, and one brother studied to be a druggist. George and Lena had two daughters, Florence May Pepperdine (married name Florence Crossley), born on November 22, 1908, and Esther Louise Pepperdine (married name Esther Thurston), born on January 6, 1911.

In March 1909, George came up with the idea to supply automobile parts via mail order. At the time, cars came from factories with few accessories or spare parts. With business connections made at his job at the garage, he was able to secure discounted prices on parts and ordered advertisements printed on credit. His initial investment of $5.00 for 500 one-cent stamps was used to mail out his batch of advertisements. George called his business Western Auto Supply Company, and sold more than $12,000 in car parts within the first year of operation. Lena wrapped and mailed the auto parts out of their home until the business made enough money for a permanent shop. An article titled How $5.00 And An Idea Became A Multi-Million Dollar Business was later published in Psychology Magazine describing his success. In 1914, he produced a catalog called Ford’s Owner Supply Book to market to Model-T owners, and sales hit $229,000 that year.

In June 1914, George was diagnosed with tuberculosis and traveled to Denver, Colorado for treatment. The following year he opened another store in Denver. By January 1916, he sold his Kansas City store and moved to Southern California. In an effort to promote car ownership in San Diego and Los Angeles, he opened another branch of the Western Auto Company in Los Angeles on the corner of 12th Street and Main Street on March 16, 1916. In 1923, George opened the corporate headquarters in downtown Los Angeles, and by 1929 there were over 170 stores in the United States. Lena was the company’s vice president and treasurer until her retirement in 1919. She worked six days per week at the headquarters and was in charge of hiring and managing 100 women in the office. In-home staff were hired to watch Florence and Esther after school and maintain the Pepperdine household.

Florence met Randolph Crossley in the Philippines while on a cruise with George and Esther in 1926. The two continued corresponding long-distance until Randolph moved to Los Angeles in 1927, and they were married on July 23, 1928. They stayed in Los Angeles for a year before moving to Hawaii where Randolph started an advertising agency. Lena died on January 18, 1930, while on a trip to Hawaii to visit Florence for the birth of her first child. She contracted “parrot fever” (psittacosis) from two love birds she had purchased on a trip with Esther to South America. A memorial service was held in Los Angeles, and Lena was buried in Glendale at the Forest Lawn cemetery. George and Lena were in the process of getting a divorce at the time, but George handled her estate after her death.

While in Los Angeles, George was involved with a variety of volunteer and charity projects building YMCA and Boys Club facilities. During one project in 1932, he met Helen Louise Davis, and the two married on June 17, 1934. Helen was born in Muncie, Indiana, on January 4, 1903, to Harrison and Florence Davis. She had one sister, Lorraine, a seamstress. The family moved to Los Angeles in 1919, where her father continued his career as a dentist. Helen was working as a portrait photographer at the time she met George. Helen and George had three children together: Marilyn (born on August 27, 1935), George II (born on November 29, 1936), and Wendell (born on February 5, 1941). The Pepperdines continued to be involved in philanthropy, founding the Helen Louise Girls’ Home in 1937 and serving on the Board of Trustees for the Casa Colina Convalescent Home for Crippled Children in 1939.

George was approached in 1937 by a friend, Hugh Tiner (a fellow member of the Churches of Christ and supervisor of Los Angeles County high schools), asking for help starting a Christian college on the west coast. George Pepperdine and Hugh Tiner met with Dr. Batsell Baxter (former president of Abilene Christian University and David Lipscomb College) in February 1937, and decided to create a four-year liberal arts college with teachings based in the Christian faith. They decided on a property in Los Angeles on 79th Street and Vermont Avenue, and George Pepperdine College opened on September 21, 1937.

George decided to sell his shares in the Western Auto Supply Company to the Gamble-Skogmo Company in 1939, which allowed him to retire. The Pepperdines lost much of their fortune in the 1940s as a result of speculative investments, but they managed to keep a small portion of their income as a result of Western Auto Supply Company stock that was owned by Helen. George’s health declined throughout the late 1950s, and on July 31, 1962 George Pepperdine died and was buried in Inglewood Park Cemetery in Inglewood, California. Helen continued to be involved with Pepperdine University for many decades. She died on October 5, 1990 and is also buried in Inglewood Park Cemetery.